Time flies when you're having fun!  I can't believe it has already been 6 months since I started Crossfit.  The past 6 months have been challenging, fun and above all, inspiring.  I have met so many great people with the most amazing stories, who have always been so supportive of me and my journey to get fit.  I still have a ways to go, but I really look forward to getting there!  Crossfit has changed my life completely...


I can now deadlift 215 lbs, front squat 195 lbs, benchpress 100 lbs, run a mile in 11 minutes, conquer a double under and so on.  Even if you are a gal like myself trying to lose weight, realizing what you can lift, press or squat gives the most indescribable yet amazing feeling imaginable.  Trust me, when you try it...you will want more!  Don't worry, you won't get bulky.  Takes a lot more than 1 hour or less a day to get you lookin like a bodybuilder.  The muscle you build will help you burn fat naturally, plus, it feels great when you can lift more weight than some of the guys you probably work with.  HA!

I can actually feel the muscle on my sides now.  Not so squishy anymore, but there is a rock hard layer there.  Anyway, here are my latest measurements and weigh in:
I can't explain why I gained in my waist and my right thigh.  I simply did.  But areas where it is pretty much pure fat, no muscle (chest), look at that loss!  So I really feel that muscle is forming beneath my fat, even in my waist, and I am so excited to see what my body will do next.  I keep hearing "Muscle burns fat" so if I have a mighty muscle layer below my fat layer(s), will it be the fatapocalypse where the fat just disappears? We shall see!  Here is a look of where I was and where I am! (I even changed my hair color.  Tired of living a blonde lie. Hahaha!) 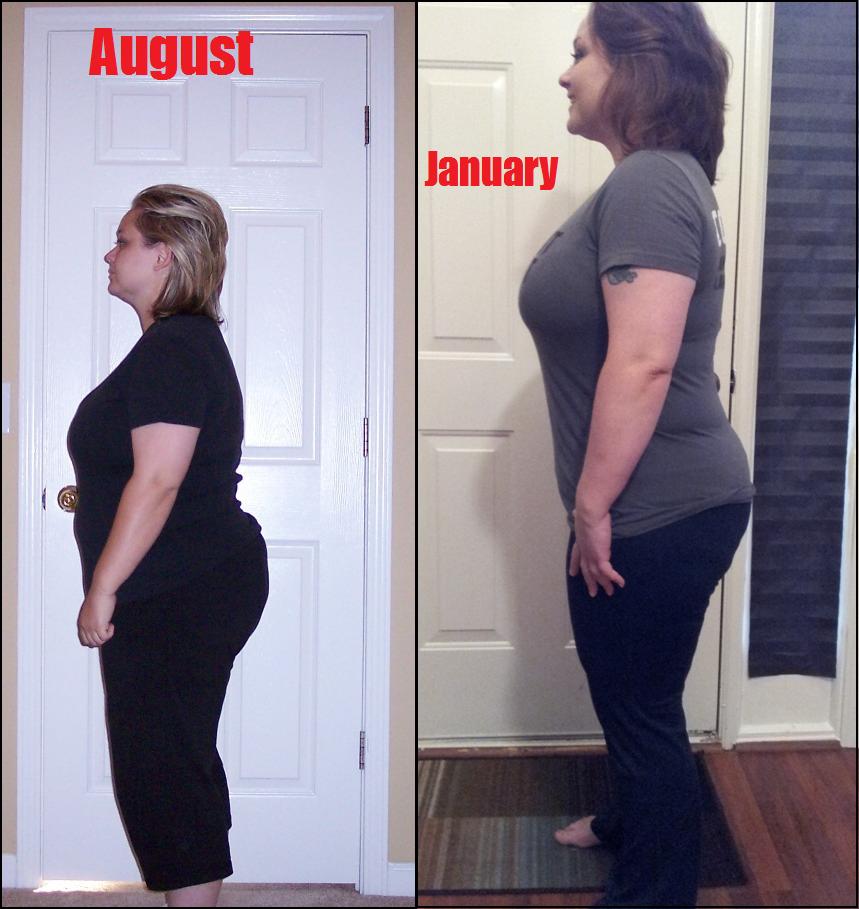 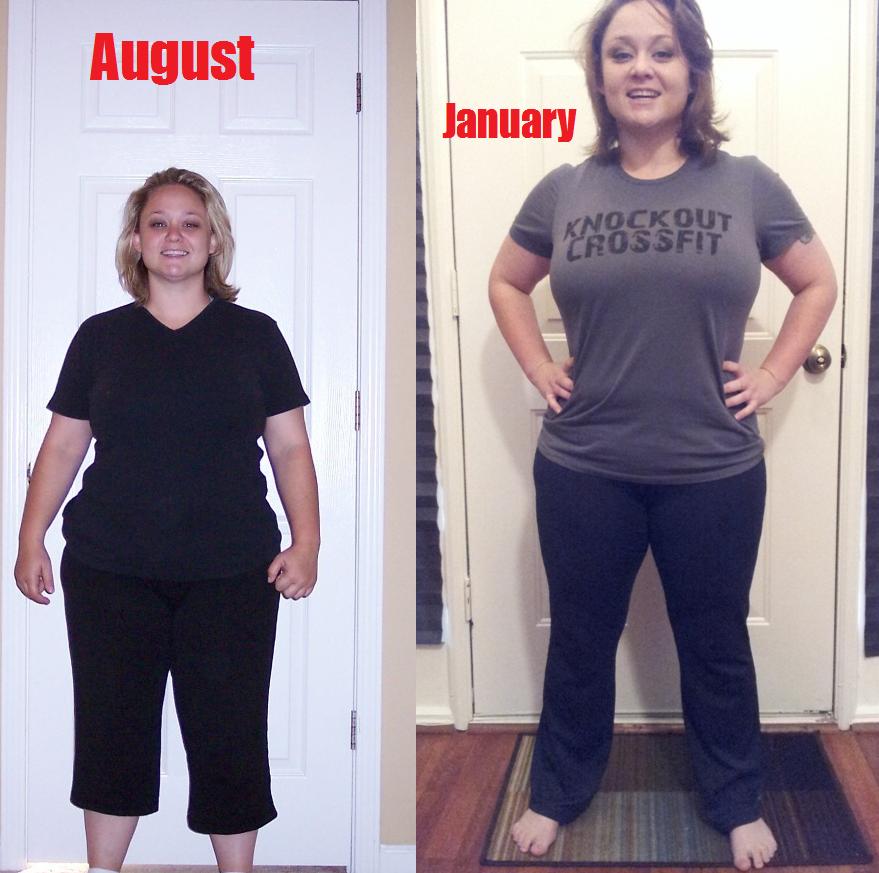 I have truly been honored to share my 6 month journey with all of you and plan on continuing this blog until you all get bored with me.  However, I really want to start sharing the stories of my Crossfit family with all of you.  See the people that inspire me on a daily basis and who help start my day off with a mighty smile.  A new year, new goals and an exciting future...I am COMMITTED!  Are you? 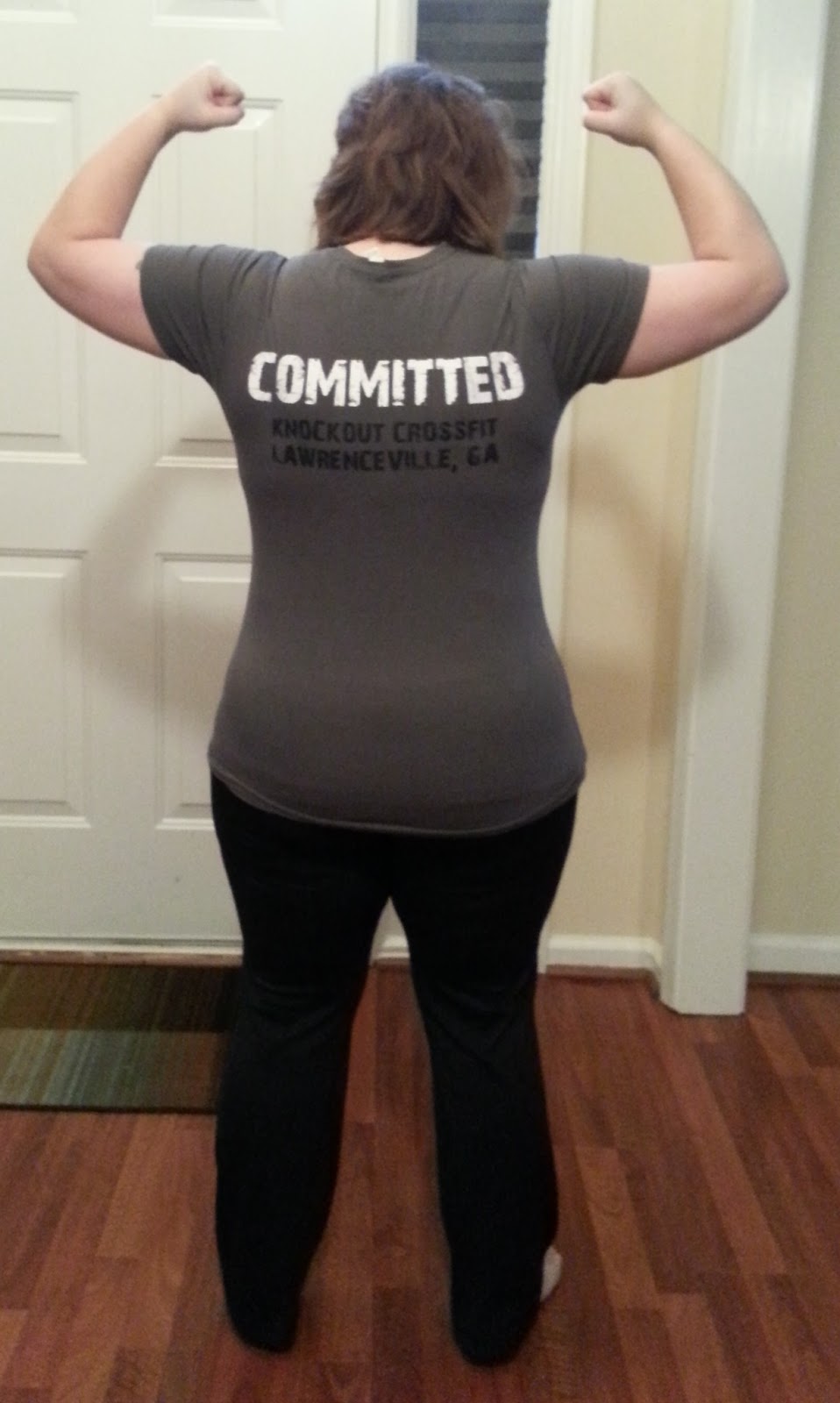 Love you all and hope to see you around and hear your stories!
Anna Dubya

Every person in the world has done some form of a diet, one way or another.  Usually diet means, count those calories, low fat, low fat, low fat.  Then came Atkins, pulling the rug from underneath us with a very meaty/low carb diet.  Don't forget South Beach, Jenny Craig, Weight Watchers, and the list goes on.  So many diets that the word itself should be introduced with thunder, lightening and a dark gloomy sky because just hearing it creates terror.

I have done my fair share of all those diets and I have never succeeded at any of them.  Instead, I resorted to foolish/drastic measures and became bulimic. That eventually evolved into not eating for days.  I loved food so much that I started to fear it.  Finally, I just gave up and ate whatever whenever, resulting in a big weight gain and tipping the scale at 223 lbs.  All in all, I really screwed up my metabolism with my shameful eating habits and needed to find a healthier balance.  Crossfit helped me get there.

I never heard of Paleo until I started Crossfit.  But after eating Paleo style, I refuse to refer to it as a "diet".  I love food, but my problem is I love the "wrong" foods. I also love to cook and experiment, which goes great with Paleo.  So what is Paleo?  Check it out where I blogged about it a few weeks ago to give an idea of what it is.  With Paleo, I have had brownies, burgers with homemade buns, fried chicken, steak, meatballs, pizza, hummus, and the list goes on.  It just makes me overall feel better, and my cravings for the naughty foods completely disappear within a week of eating Paleo.  I even flavor my drinks with water enhancers, like Mio, which are yummy and help kill my sweet cravings. 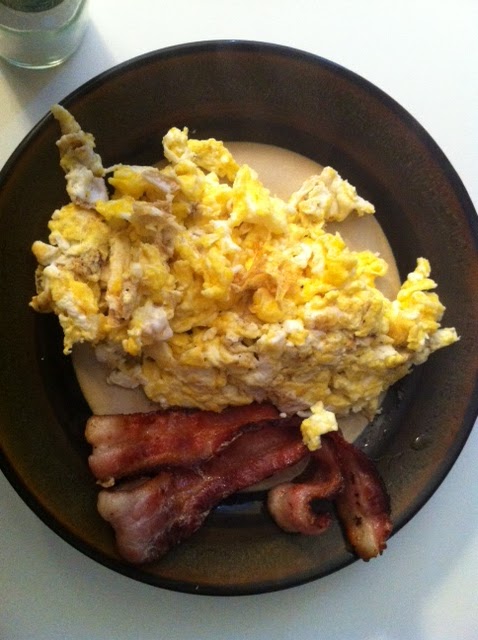 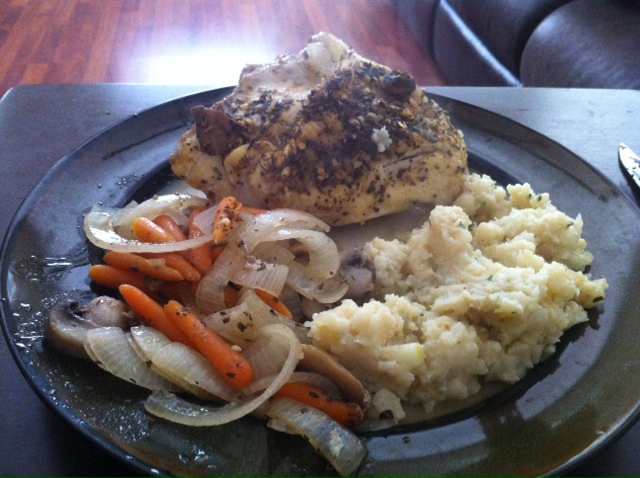 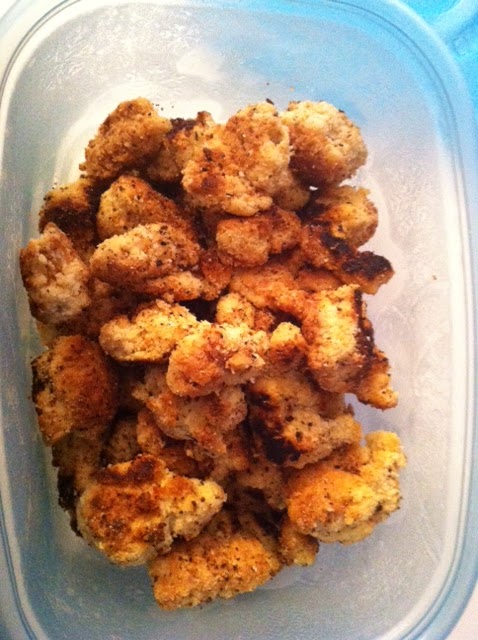 How do I get away with fried chicken?  Easy, batter the chicken in egg and almond meal then fry in a little bit of coconut oil. I use just a small frying pan and put enough oil just to help me get the almond meal crispy.  If the chicken is thick, I throw it in a pyrex after frying and let it bake at 350 until fully cooked.  There are so many recipes and free apps for paleo that it makes the options endless.  I never count calories, I never concentrate on what I "have" to eat.  I simply think, what am I in the mood for, find a Paleo recipe and attack!  They even have crockpot recipes, which rocks when you are not in the mood to cook dinner.

So far, 2 weeks of Paleo this year which must be working because I didn't get to work out until Thursday this week.  Ya, I got sick again.  This time an ear infection and on the edge for bronchitis round 2.  But I am back on the road to recovery.  I was so frustrated while I was sick because all I could think about was crossfit  Finally, upon my return on Thursday I did 2 WODs and today I did an extra round, rowed a mile and completed a burpee challenge after my WOD.  Ahhhhh, it is good to be back...again.  LOL!

Last week, I weighed in at 201.3 and this week I am down to 199.1.  Not bad for just 2 days of working out, but I am telling you...Paleo has a lot to do with that.  Here I am on Thursday getting back in the swing of things.  I admit, I struggled pretty hard that day but I still completed my WOD and even attacked a second WOD!  Whoot whoot! 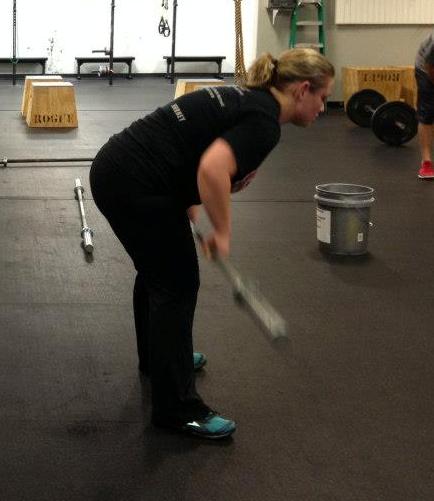 I hope this time I crushed my cold for good!  It would be nice to get back in the swing of a normal weekly routine again as I missed all my crossfit buddies who help get my day started with a smile.

Work it and cook it baby!
Anna Dubya

http://knockout-crossfit.com/
Posted by Unknown at 6:03 AM No comments:

Bench it with Paleo

I'm aliiiiiive!  I was out of commission for a week thanks to attracting both bronchitis and the flu last weekend.  So I was forced to take a week off from Crossfit, something I haven't done in 6 months.  The first day back, ya, that was tough.  For a week, I was out of breathe by just peeling an orange.  So my first warm-up of the week included hacking coughs like a 70 year old smoker, lots of stares from my fellow crossfitters and an icey cold bengay burning sensation in my chest.  While that all sounds terrific, I pushed through and by the end...felt oh so much better.

I was even surprised by my performance this week. WOD times were good, set a new personal deadlift record of 215 lbs, mile run was less than 12 minutes (usually take longer) and the best part...I didn't have that 70 year old smoker cough during the WODs.  My body was cooperating and now I feel great!

I certainly have missed crossfit and most of all my crossfit family.  So to celebrate the completion of my first WOD week of 2013, after our WOD today we partnered up for a bonus WOD.  A bonus WOD which included a few wall balls then bench press your WOD partner.  Here I am, working extra hard.  Ok, it may have been a "little" unfair seeing my partner was probably 95 lbs and I weighed in today at 201.3 lbs.  But hey, laying there is hard work people! 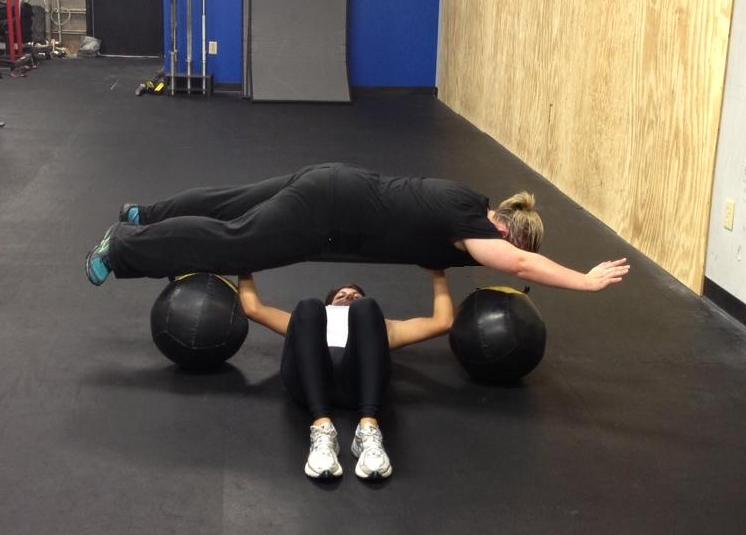 I keed, I keed!  I admit, I missed you guys and am so glad to be back in the swing of things.  I am a 6am crossfitter and have missed the usual, good morning laughs, was that warm-up our workout?, WOD attack with serious face, victorious collapse on the floor followed by post WOD laughs. My daily workouts always put me in a good mood (unless there are burpees), giving me a great start to my day.

Oh, ya...the paleo challenge.  I started on Monday weighing in at 205 lbs.  Found a great free app called myKitchen that has some GREAT paleo recipes.  One of which was brownies, which I made and were actually pretty darn good.  They really should be called fat burners, seeing that the ingredients were all items that actually help your body burn fat naturally without even trying; coconut oil, almonds, etc.  Good stuff, and it helps that the local Kroger sells grass fed beef, nitrate/nitrite free meats, etc.  So I am paleo happy these days!

Happy to be back and look forward to seeing you all again soon!
Anna Dubya

http://knockout-crossfit.com/
Posted by Unknown at 5:59 AM No comments: 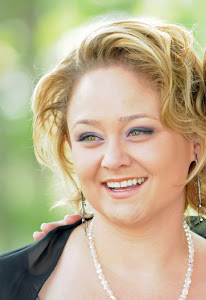